The new owner of the Cat Island golf course, closed since 2019, says a fall reopening is planned. During the closure, the course near Beaufort managed to maintain “its bones” despite poor maintenance, according to the golf course architect who worked on the original and is now leading its restoration. In June, Resort Development Partners, a company specializing in operations and strategic planning for resort communities, bought the Cat Island club from Cat Island Group LLC, which had previously purchased the property at public foreclosure sale and then came under fire for selling memberships without reopening the course. The 18-hole golf course in the waterfront community on Lady’s Island had been closed since January 2019. After months of neglect, the course had fallen into poor condition, said Tim Mervosh, a Beaufort resident who is serving as general manager for Resort Development Partners.

Cobb, a prolific golf course architect, had roughed out the hole locations but, in fact, it was LaFoy, who did most of the work. LaFoy, also a golf course architect and past president of the American Society of Golf Course Architects, was working for Cobb at the time. He was around 40. LaFoy, now 75, who lives in Greenville, is thrilled to be back. Usually, when golf courses are built, tweaks are made during the construction phase but LaFoy didn’t get that chance when Cat Island was built. It opened in 1985. “I’m doing what I wish I could have done 30 years ago,” LaFoy told the Beaufort Gazette and Island Packet Thursday. “I look at this as a second shot.”

When he first saw the course after so many years, it was in tough shape. Greens were nothing but weeds and sand. In fact, weeds were everywhere. LaFoy was shocked — that the course was not in worse condition. “The bones of the golf course,” LaFoy said, “were still here.” Like an artist, LaFoy is adding his touch to the green complexes, which include the bunkers.

“It’s a new golf course,” says LaFoy, pointing to his drawings that show design changes that he says will add character. Golfers, he adds, will appreciate being rewarded for good shots, which the new features will require. He’s added dips and decks to the greens and more shape to the bunkers, which used to be oblong.

It’s critical work, says LaFoy, quoting C. B. Macdonald, who built the first 18-golf course in the United States and once said putting greens are to a golf course what the face is to a portrait.
“That’s how important they are,” LaFoy says. “So we’re working on the face of the golf course.”

New drainage systems are being installed in the bunkers. Fairways have been mowed. New sod has gone in around bunkers. Greens, which were fumigated, has new grass. It’s a long process to restore a golf course completely, Mervosh says. “You can’t neglect your home for three years,” says Mervosh, offering an analogy. 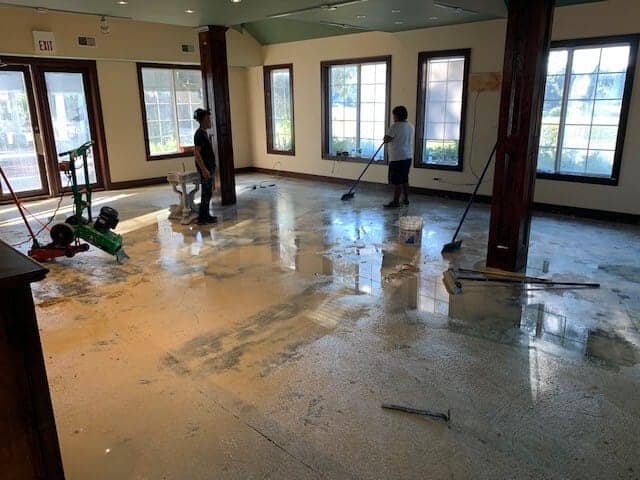 With its heat, salt, mold and alligators — you name it — the Lowcountry is hard on a golf course, he says. But a soft opening of the golf course is planned in October, says Mervosh, adding he’s had to overcome not only challenges with the physical condition of the course but skepticism from golfers. “The proof’s in the pudding,” Mervosh said. “We’re building a golf course. We’ve told everybody what we’re going to do and we’re doing it.” The new owners are selling private memberships with a $12,500 initiation fee with monthly dues. The memberships are available to residents with homes on the course and those living off the island. The course will no longer be open to the public. Mervosh says there’s a market for a private course that’s not located in a gated community. Cat Island is known for its variety of trees and views of the water including the three par-three holes — and two back-to-back par-three holes.

LaFoy, the golf course architect, says the course was designed as part of housing development but stands out because the homes are not as intrusive as they are on some courses. “You don’t really get the feeling you are surrounded by houses,” LaFoy says. LaFoy didn’t get much respect when he tried to play the course in the mid-1990s. He was in the area for a funeral. When one of his friends asked if the architect of the golf course could get a discount, LaFoy recalled with a laugh, “they said no.” LaFoy admits that he would probably would have restored the course for free, but adds that he didn’t tell that to Mervosh, the general manager. “Everything is starting to come together,” says LaFoy of the restoration.

Cat Island Club is a premier private Country Club nestled in the heart Beaufort, South Carolina’s Sea Islands. A place simply too rare and too beautiful to treat with anything but the greatest care and respect.

Have questions about the Cat Island community? We’d love to hear from you!